YOUR WINDOW OVER HISTORY 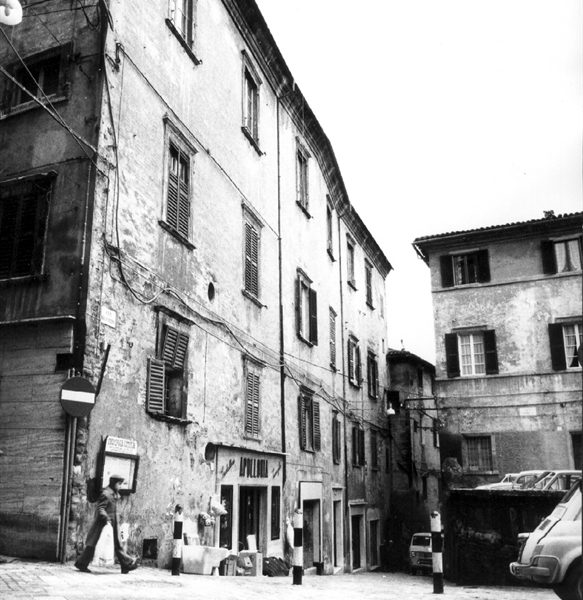 The building was erected by Gregorio Ghislieri on the foundations of a fortified construction from the Middle Age, as indicated by the small tower on the south-eastern corner. The building complex overlooks a small square along via Pergolesi in front of Palazzo della Signoria and extends along via del Fortino until Mura Occidentali (Western Walls). The two rows of Renaissance windows are framed in stone and the frieze on the beautiful door lintel recites: <<Gregorius De Ysileriis 1492>>. A 16th-century wall with Baroque windows and door acts as filter between the square and the small courtyard of the building. Two masonry coats of arms which refer to Bishop Tommaso (1505) and his brother Giovanni, who died in 1500, are visible on the side along Via del Fortino. According to Canon Annibaldi, in the early 800, the painter Corrado Corradi from Cupra <<a glorious event from the Roman history in the former Ghislieri, now Scalamonti house>>. The oldest information on the Ghislieri family, which came from Bologna, dates back to the beginning of the 11th century, and mention Gislerio, bishop of Osimo (1037), together with Angelo, Count Palatine, law scholar and Gonfalonier of Jesi in 1453; Tommaso, bishop of Jesi from 1464 to 1505; Alessandro, Knight Commander of Grace of the Order of Malta, Gonfalonier of Jesi from 1831 to 1860 and first president of Cassa di Risparmio, founded in 1844.
(Source: Loretta Mozzoni)

LO SVEVO is situated in the historical center of Jesi, near the place where the Roman Cardo and Decumanus meet. The medieval town was built on the Roman city plan. Thanks to such a strategic position, our guests can walk in a few minutes to the most important sites: from Piazza della Repubblica with the historical Teatro Pergolesi, to Piazza Federico II with Teatro Moriconi, the Cathedral of San Settimio and the old bishop palace complex; from the City Walls to Piazza Baccio Pontelli with the not-to-be-missed Torrione di Mezzogiorno to Arco Clementino, the historical door to the city of Jesi. A few more minutes of walking will take you to Chiesa di San Marco, a real Gothic jewel.Art lovers will be fascinated by the numerous museums: Pinacoteca Comunale in Palazzo Pianetti, with the famous Stucco Gallery in rococo style and the wooden paintings of Lorenzo Lotto; Museo Federico II Stupor Mundi; Museo Civico Archeologico; Biblioteca Planettiana in the historical Palazzo della Signoria built between 1486 and 1498 according to a project by Francesco di Giorgio Martini; Museo Colocci; Museo Diocesano, and Museo della Stampa. If you want to learn more about the history of the city, please ask the reception staff to contact the tour guides from the City of Jesi for an organized tour (with charge). And if you want to have fun at night, take Via degli Orefici, in front of LO SVEVO, to reach the numerous restaurants, bars, and pubs that liven up the night life in Jesi.